Students Pursuing Literacy through Art Together

The  literacy program that I created for the City of Long Beach’s Afterschool WRAP programs.

Here is a news article in the Long Beach Press Telegram about our recent art show.

LONG BEACH >> When they began the school year, Edison Elementary School students were largely unfamiliar with the Japanese art of paper folding known as origami. But art integration specialist Lesley Glenn sought to change that.

After sharing with students the book “Sadako and the Thousand Paper Cranes”, in which origami plays a key role, Glenn challenged children in grades three to five to make 1,000 paper cranes over a six-week period. In the end, they more than doubled that figure, and their efforts were featured in a 14-foot crane installation during the Nov. 21 art show at the Central Long Beach school.

“It was something different for them to learn,” said Glenn of Students Pursuing Literacy Through Art Together, part of the city’s after school program Winners Reaching Amazing Potential. “It was really hard folding origami cranes. It’s not easy. They wanted to give up, but they kept pushing through once they realized they could actually fold these cranes.” 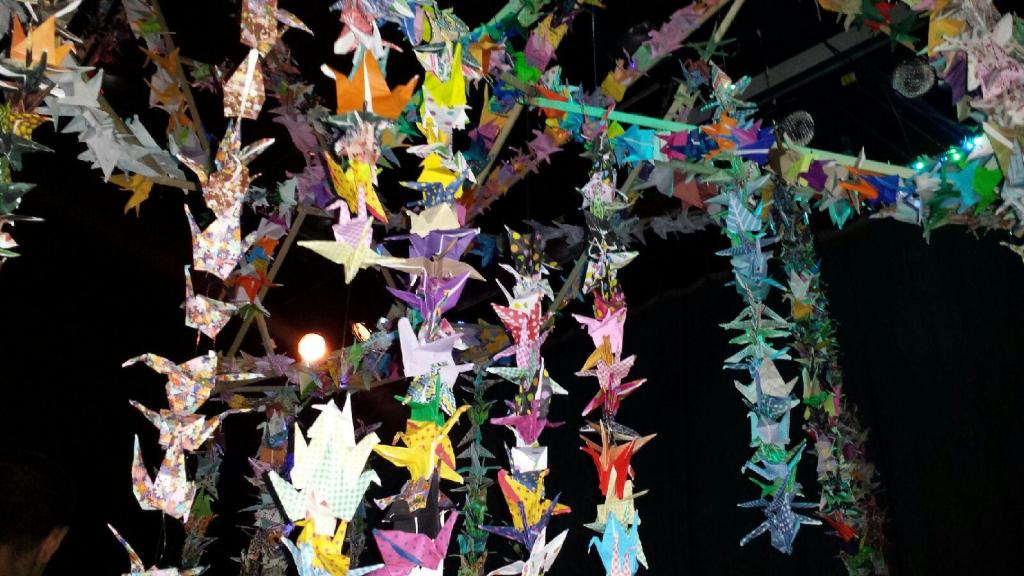 Glenn said the students were inspired by the true story of Sadako, a Japanese girl who developed cancer after the United States dropped the atomic bomb on Hiroshima. Someone told Sadako that if she could make 1,000 paper cranes, any wish she had would come true. But she could only manage to fold 644 cranes before her death. The rest were completed after her death, and today Sadako has become an international symbol of peace.

“A lot of the kids — they learned about 9/11, but they don’t learn much about World War I or World War II,” Glenn said. They found the bombing of Hiroshima and Nagasaki shocking. “Why would the United States want to bomb another country?” they asked. “They didn’t understand that part of it or how war can cause so much damage to kids their own age. They were able to identify with Sadako.”

As an art integration specialist, Glenn has the task of using art as a means to teach children about a range of subjects, such as literature, math or science.
Advertisement
She said the crane exhibit demonstrates how after-school programs help enrich the learning environment for students in economically disadvantaged areas of Long Beach. Most of the children at Edison qualify for free and reduced lunch. The City of Long Beach Parks, Recreation and Marine partners with the Long Beach Unified School District to implement a citywide WRAP after-school program, according to Kevin K. Paimany, community services supervisor for Long Beach Parks, Recreation and Marine.

“Through these programs, thousands of local students and their families have access to convenient, no-cost, high-quality after-school programs on their school campuses every day,” he said.

During the art show, “everyone was just in awe about what the kids had done,” she said. “It really was a great event.”