We have all read the stories about pets becoming  caregivers and companions during challenging times in our lives.

I love those stories; especially when they include a rescued canine from a shelter.  I have my own story and thought I’d share it. But before I do, I would like to invite you to grab a couple tissues and watch this video first .

Okay, clean up your face. 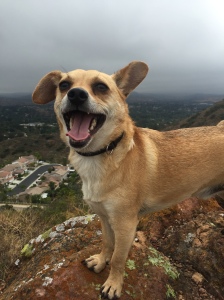 I originally got Barkley for my son Justin after we had lost his dog in a car accident. I remember the day so clearly.  It was a bright sunny day in February right before a chemo appointment in 2013.  I was on my third round of Adriamycin/cytoxan otherwise known as the red devil and by a quick miracle felt pretty good that day; I could stand up.

Justin and I went up and down the kennel aisles of our local animal shelter.  We brought out a handful of dogs into the yard to see how they would respond to us.  Justin was taken by a rather furry beagle named Charlie.  He was very loving.  I, on the other hand, didn’t feel the connection. (Let’s not forget, we went for my son, not me)  I continued to look in the kennels and got to a row that was sectioned off.  I asked about the dogs in that row and was told they were the ones that had been there the longest and were next to be put down.   I walked slowly down the line of cages, catching the eyes of each dog and almost felt like I could identify with each of them.  Newly diagnosed with cancer I felt death knocking at my door.   My eyes welled with tears.  When I got to the last kennel in the row, I stopped. What I saw grabbed my attention. 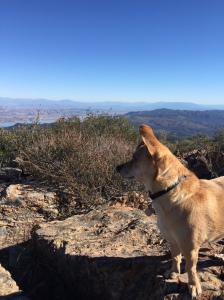 I watched him for a good minute or two.  He was basically unaware of my presence.  Picking up the toys in his cage, he was tossing them in the air, running around, playing. He was happy, or so he seemed to me.  I thought to myself, “Dude, you’re about to be put down and you don’t seem to give a rip.”     I caught his eye, he came up to the steel wires that separated us, licked my hand, then bounded back to his toys.

He didn’t care about his future because he was focused on his present.

I asked the attendant to get him out for me. He followed us to the yard happy to be with Justin and I, but more excited about his surroundings.   He’d jump up on our legs, then hop down exploring the play yard, then come back to us, as if he was saying; “Isn’t  this amazing? “.

I looked at Justin, and we both agreed together.

We took him home, named him Barkley and he settled in quickly.

The next day, I had chemo.  And like after all my other chemo appointments, I was bed bound for a good week.

Barkley never left my side.

That was only the beginning of our relationship.

He’s been my 4-legged best friend ever since . 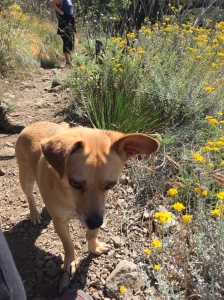 He never leaves me alone, ask my husband and kids.  He follows me everywhere, even to the bathroom. I’m never out of his range of sight when I’m home.  Mike will even have to tell him sometimes, “leave your mom alone.”

When I started hiking as therapy, he naturally came with me. And now I very rarely hike without him.  He’s climbed mountains that others never will, even humans.  Sometimes, the day after hard hikes, we will both be hobbling around the house with sore legs but then I’ll get out my backpack and Barkley stands by the door…..ready to go. He loves the outdoors.

He’s become like one of my kids.  And yes, sometimes he pouts.  Like when I can’t take him on a specific trail, he will look at me when I come home like, “I can’t believe you went without me,” and will ignore me for awhile but not long.

When I summited Mt. Whitney the first two things I thought were: 1. Call Michael  2. I wish Barkley were here.

When Mike and I go out, it’s very rare we are gone longer than a few hours (unless we are traveling).  I can’t bear to leave Barkley alone.

He’s my cuddle bug.  Even on days I don’t want to cuddle. 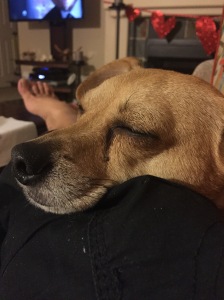 Barkley is a terrier, daschund mix.  He has one floppy ear, and an uncanny sense of smell.  He lives to explore and I know without a doubt he loves his life.

My husband had a bond with our first dog, Snowball, a pure white Akita.  When we lost her in 2005, it was devastating for him.  We have Snowball’s ashes in a box, with her tags and a huge puff of that fur that would fill up our backyard during her molting season .   When I dust the shelf she’s on, Barkley will often come over, sniff her box, wag his tail, bow his head and take a step back, as if to honor her place in our lives.  I tell him, that he too will always hold a sacred place in my life.

I never intended for him to become my dog, but he did and he is.

The dog that almost lost his life,  now shares his love for living with me.

Barkley IS my dog. 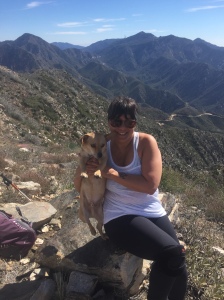 As for my son Justin, he now has his own dog, a huge and energetic Catahoula Leopard  hound named Lexie.  She and the Barksters are friends.

I’d love to hear about your canine friends and how they’ve made a difference in your life .